“Global Warming,” like so much in contemporary bandwagon meme production, turns out to be its opposite; “the Earth is warming,” “Donald Trump is a terrible president,” “socialism is the wave of the future,” “war can be eliminated if WE (free societies) take the first step,” “we can solve social problems if we empower a centralized government to act.” ...Blah, blah, blah.

If intellectuals, “experts,” and journalists insist on something, it’s likely to be, at minimum, not true and even more likely to be its opposite.

One thing you can always be certain of; the “solution” to exaggerated or fabricated problems will always be a more centralized and powerful state.

...Roll your eyes and laugh at them.

Prometheus Stealing Fire from the Gods. A Mezzotint Engraving by Max Klinger 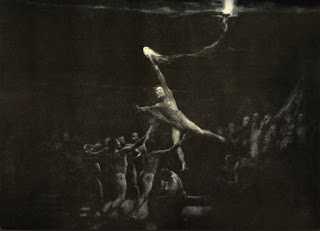 I’ve watched this a few times over the years in a variety of contexts. Each time I find its prophetic accuracy remarkable. Like the brilliant insights found in Eric Hoffer’s “The True Believer”, it gets to the real motivations and strategies of authoritarian ideology. The roots of all politics ultimately lie in psychology. When a country’s collective psychology becomes dysfunctional, one can be sure that its demise is at least in part aided by deliberate subversion.

As a side note, I don’t recall who said it but it was noted that, imposing a socialist planned society in The U.S., the best vehicle of subversive takeover would be the Democrat’s party — who would have known.

The Dance if Nonsense

Polarities are at war and, in the end, neither side wins. Over time, everything extrapolates into something wonderful...and terrible.

Cultural and Political Leftism has Thrown the World into Chaos

In their perpetual desire to transform nations, every Jacobin control freak on the planet now sprints to seal their deal. They thought a smooth arrival at the finish line — global punitive socialism — would occur with the election of Hillary Clinton and her like-minded globalist compatriots in Canada and European nations, etc.

A fervent — and largely unexpected — backlash has effectively thrown the “progressive” agenda into a tailspin. So, now what? There are now Western “democracies” where one risks banishment from public discourse and even fines or jailing for failing to follow the party line - a backlash to a backlash.

...Desperate measure in disparate times. Backlashes from each side have become like a ping pong ball, each time a fervent attempt to win the game.

In the end, the left will always resort to coercion. You must follow their drummer. You must agree with their vision. You must be compelled to endorse their imposed hierarchy of command.

For the forces of decency to win, every mundane daily act will need to be an act of true resistance maintained. DO NOT FEED THE MONSTER. Starve it, deprive it if any legitimacy, destroy it, and leave it on the ash-heap of other tyrannical carcasses that have plagued the mere desire to live freely and pursue happiness.

The essence of populism is a rejection of those who have been in control for the past several decades — and more.

The essence of “resistance” to populist attempts to return power back to citizens is the usual stupidity of those who merely wish to maintain coercive state power, all in the illusion that one is somehow a rebel or a “free-thinker” for licking the boot of state and agreeing with established institutions.

Lots of excitement from both sides of the spectrum over that lady with the long name affectionately abbreviated (in the style of “FDR,” ”JFK,” etc.).

...and, here I am, like everyone else, honoring her with attention.

There is absolutely nothing she has said that is remotely profound, insightful, or worthy of implementation in the real world. The only reason I feel she warrants any attention at all is the glaring fact that she does represent a successful culmination in the cultural Marxist game-plan.

Cortez is a caricature of everything academia has worked on for over several decades. Now, someone with genuine political power is an individual reared on every cliche’ suburban socialist diatribe ever concocted. Media is full of defenses of her policy positions as well as sober attacks on why such positions are just plan stupid. For those who truly miss the dreamland of Soviet totalitarianism, they now have a media-cultivated icon to push their agenda through once more. For those of us who ceaselessly state our humble desire to be left alone and free of a coercive government monolith, Cortez earns an eye-roll and cautious concern that a huge segment of the population is once more being lured into the socialist swamp.

Comparisons to what happened in Venezuela are beyond obvious. Late-night comedians and CNN drones are pushing the line (lie) that America can become the new Sweden (not that the current state of affairs there warrant praise) but, the agenda being pushed by this latest clown of statist concentration of power is not a “compassionate” welfare state and high taxation. The goal, as usual with these closet authoritarians, is to destroy America’s constitutional free republic and replace it with just another garden-variety destitute Marxist prison.

Some have expressed the view that this latest mouthpiece for the dream-vision of tyrants is “hot.” While she runs rings around the likes of Nancy Pelosi or Hillary Clinton, I think she bares a rodent-like appearance. Appropriate for a parasitic scavenger seeking sustenance from other’s property.

If I may paraphrase: First they came for the stock portfolio of wealthy businessmen...but I wasn’t a wealthy businessman. Then they come for those who questioned “climate change”...and I just wanted a reasonable electric bill. Then they wanted the government to dictate my child’s thoughts and strip me of any authority over my own life...but there was no one left to say...”FUCK THAT!”

PC cultural relativism and the suicides of the stupid.